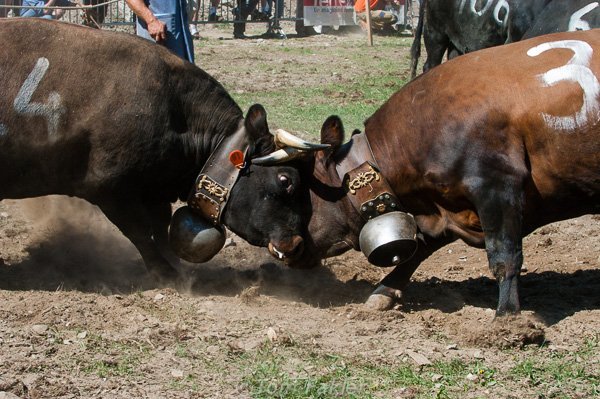 Spectators cheer as cows with names like Papillon and Surplice face off in an outdoor ring perched between village and meadow in the Swiss Alps. White numerals on four pairs of black hides, the animals pitch or stand fast, winners or losers in the annual fights of the queens. My husband and I are in Mission, Valais, fans cheering all around us. The Combats des Reines, fighting cows, is underway.

Microphones crackle as judges bark orders at handlers, who use guide sticks to maintain order. After the first round, everyone is escorted from the ring for a rest, and the next group lumbers in, bells clanging. These are not hormone-enraged bulls, but milking cows with attitude. They are here to push and tussle their way to the head of the herd in time for the march up to summer pastures.

Lock horns with a Valais tradition

In the run-up to the action in the ring, there was time for a country lunch. Cheese, sausages and dried meats were laid out on rustic tables, and raclette scraped onto brown bread or potatoes. Musicians serenaded the crowd with alphorns, fiddles and accordions. Children played tag in the meadow, and hide-and-seek behind the judges’ trailer.

Unlike bull-fighting, cow-fighting is bloodless sport marked by locking horns and shoving—it reminds me of arm-wrestling. Dominance, not harm, is the aim; the winner is she who does not back down!

Héréns is an ancient breed, present in Valais and nearby mountains of France and Italy since 3000 BC, and these cows are nothing like the soft-eyed bovines I’ve come to know in Switzerland. In arresting contrast, Héréns cows challenge each other without provocation to establish hierarchy within the herd. Seeing these girls in action is a glimpse into a Swiss mountain tradition little known outside the country.

Picking a fight, the Héréns way

For these tournaments, cows compete in six categories, according to weight and age, and winners receive embossed leather halters sporting enormous cowbells. Victory increases a cow’s value significantly, with breeders receiving a bumper fee for every calf born to the queen, as well as fame throughout the canton.

The annual battle of the queens kicks off on crisp days, with snow still dusting the lower mountain peaks. Regional elimination heats are held from the end of March, culminating in the crowning of the queen at the cantonal final in Aproz in late April or early May.

In June, bouts take place on high mountain meadows, as Switzerland’s fighting cows head up to summer pastures. Each October, rodeo-style duels are held in Martigny’s Roman amphitheatre during the annual Foire du Valais exposition. Autumn harvest festivals in the Valais can also feature a day of cow fights.

Visit the Canton Valais/Wallis website for dates and locations of qualifying matches for the current cow fight season. For more information about the Herens breed, practice your French on the website of the Swiss Federation of Livestock Farming of the Héréns breed.

I enjoy the festive atmosphere of cow-fight season, and hope you will, too. If you’re spoiling for a fight this spring or summer, head for the mountains of Valais!