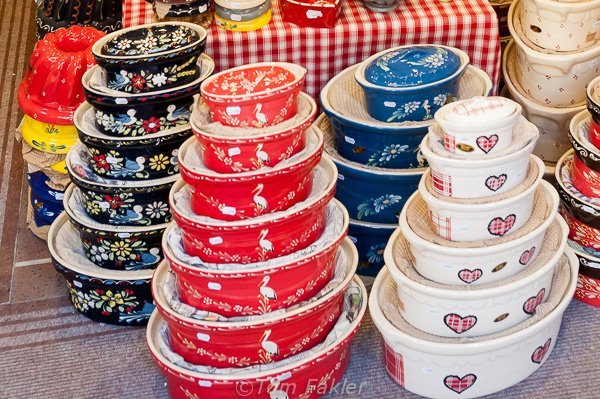 Baeckeoffe is one of the most famous Alsatian specialties, a hearty casserole of three kinds of meat, leeks, onions, potatoes and a lot of Alsatian Riesling. It is cooked for several hours in a slow oven, in a casserole of the same name. With each hour, the meat becomes ever more tender, and the dish infused with the goodness of leeks onions and herbs.

When winter returned to the Swiss-Alsace borderlands this weekend, I remembered the Baeckeoffe I enjoyed in Strasbourg after hours of wandering the Christmas markets there. It can be a soulful meal for days like this, too.

The story goes that Baeckeoffe was originally a classic farmer’s one-dish meal, eaten on wash day, in an era before home washing machines. Early in the day, while water was heating in the laundry house, housewives filled colorful oval enameled casserole dishes with meat, vegetables and wine, covered the mixture with pastry and took it to the local baker.

A more likely story, from chef and Alsatian native Jean-Georges Vongerichten, via cookbook author and Alsace resident Sue Style, is that Baeckeoffe comes to us as Sunday midday fare. In this version, the baker’s oven was put to use, but during Sunday morning mass. This resonates with the pot-roast-on-Sunday memories of my own childhood in the U.S. south.

That’s a silly idea, really. You don’t “sample” this dish, you come to it raving with hunger, a hunger that is only partially sated by an appetizer such as a dish of herring with apples, or other fare from northern climes.

By the time the main course arrives, it can be a scrum to see who can get it onto the plate first. If the cook has done the job well—put in plenty of onions, garlic, leeks and herbs and let the casserole cook for a very long time—the aroma can be, at first whiff, rapture-inducing.  The potatoes and carrots atop the dish, happy with a garnish of fresh parsley, sing along with the seasoned meat, in harmony with the taste of meltingly good pork, lamb and beef with their discrete flavors. Oohs and ahhs follow. And so it was at Pfifferbriader Winstub in Strasbourg.

Whatever its origins, Baeckeoffe offers the great advantage of no hard and fast recipe. The more heart that goes into it, the tastier the result. The dish is a sure-fire success with a voracious crowd (of carnivores, it must be said).

If you have 20 minutes for composing the dish and fifteen hours or so advance notice, you may want to get fancy with this recipe from Hubert Keller, another famous chef from Alsace.

My thanks to the Greater Strasbourg Tourist Office, who treated me to a Baeckeoffe evening at Pfifferbriader Winstub in Strasbourg, after a chilly day of touring the city. Taste sensations were mine.

If you liked this post, you may also enjoy:

Super Zampone: Over the Top in Emilia Romagna