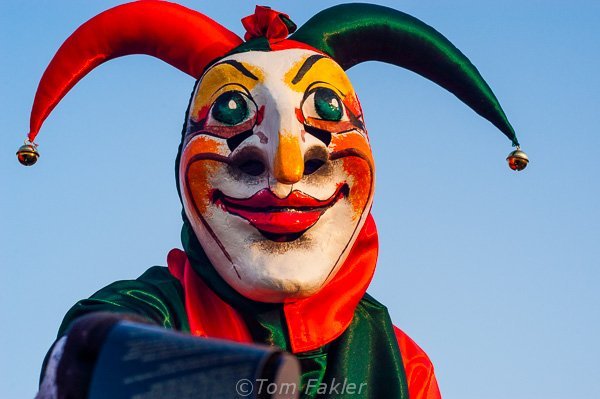 Costumes worn by Fasnacht participants come in many forms. Clique members will dress to suit the subject chosen for by the group for lampooning this time around. However, there are several traditional costumes and masks always on show. Collectors can purchase (pricey) pewter, or ceramic figures dressed for Fasnacht, sold by the group, or singly. Here is a sampling from Fasnachts Past.

There are at least three more traditional Fasnacht characters:

The Blätzlibajass wears a sack-like costume, covered with hundreds of tile-shaped fabric tabs, and a cone-shaped hat.

Dummpeeter has a snub-nose and a white pigtail, wears 18th-century garb and a tiny brass trumpet as a pendant.

Pierrot wears a peacock’s feather on a round cap, and has an air of melancholy. He was a character of both the Commedia dell’Arte and French pantomime theater, made famous by Picasso.

Do you have a favorite Fasnacht figure?

The (mostly unwritten) rules of Fasnacht