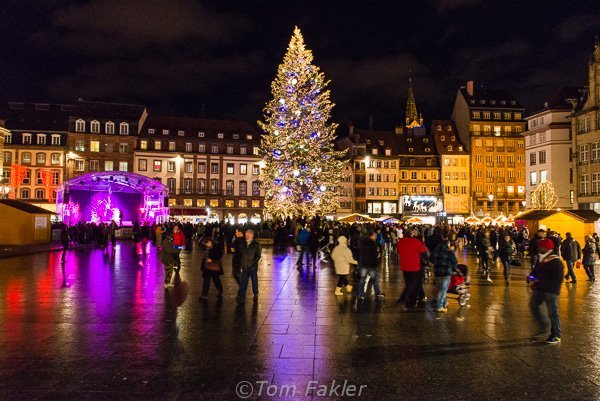 Each December, a gigantic fir tree covered in lights holds court in place Kléber, in the Alsatian city of Strasbourg. It is the centerpiece of France’s oldest and largest Christmas market, and a backdrop for outdoor performances held during the Advent season. This year, an exhibition in the cloister of the St. Pierre-le-Jeune Protestant Church marks the 20th anniversary of the Great Christmas Tree on place Kléber.

A mighty tree for the Capitale de Noël

Since 1992, Strasbourg has been France’s “Capital of Christmas”.  Each year, a new theme is chosen for decorating the tree:  this year, it is “Au Claire de Lune”.  The tree at place Kléber is 30 meters tall, weighs 11 tons and is believed to be the largest Christmas tree in Europe. Crystal spheres specially manufactured by Cristalleries de Saint Louis for the Strasbourg tree add a rich blue glow to the decorations.

Designed with a creative heart and steady hand

Tireless in her creation and execution of artistic projects, Antoinette Pflimlin has directed a number of large-scale installations for the City of Strasbourg, in addition to her inventive decorations for the Christmas celebration. Contributing to the life and arts of Strasbourg seems to come naturally to the daughter of Pierre Pflimlin, long-time mayor of the city and president of the European Parliament in the 1980s.

She oversees every step of the annual production, from selection of the tree in summer—it must be not only strong and artfully shaped, but located within reach of a roadway, to facilitate transport—to installation and decoration, a process that takes about three weeks in November. As we walked around the cloister, she enthusiastically described the extraordinary effort of artisans from the region who contribute to each year’s program. A short film showed the cutting, transport and decorating of the tree. It is a Very Big Job for a number of folks!

A cloister filled with Christmas memories

All of the designs exhibited in the cloister have been used on the big tree at Place Kléber: miniature houses, balls, lanterns, birds and boats suspended from branches; and angels and a skating rink, in the landscaping at the foot of the tree.

A reason to return (as if I needed another…)

The exhibition at St. Pierre le Jeune gave me an opportunity to visit one of Strasbourg’s most evocative places of worship, an important landmark in its own right. The cloister housing a small-scale exhibition of ornamentation for the tree on Place Kléber brought human scale to an enormous undertaking. Meeting the woman behind the designs fired my own enthusiasm to learn more about the city and its long-held artistic traditions.

I look forward to my next visit to Strasbourg!

My thanks to Annie Dumoulin, Deputy Director of the Greater Strasbourg Tourist Office, for guiding me through Strasbourg , and for facilitating my introduction to Antoinette Pflimlin.