It was a watery “Swiss ikat”, looking for all the world like the delicately-patterned silks of Central Asia. A looming rock face reflected in the Oechsinensee, a jewel of a lake nestled in a tiny valley above Kandersteg in the Berner Oberland. It was also the vista Tom and I shared with a small herd of Swiss cows as they made their way up to summer pastures last week. The cows’ march to higher ground (actually it’s more like a trot) is a Swiss tradition, through and through. 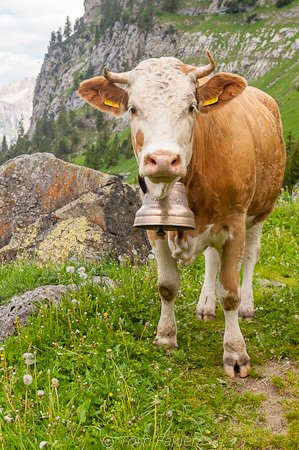 In mid-June, following a published schedule, dairy farmers all over Switzerland take their animals up to munch on herbs and alpine grass, and they stay there for twelve weeks. Summer in mountain pastures, coupled with a diet of pure grass and flowers, is what gives Alpkäse its name. The ritual and use of traditional methods for making the cheese right there on the mountain authenticates the process.

I’d been invited to walk up with the cows for a farmer’s brunch with two families who pasture their animals together over the summer. We would gather around a homey wooden table in a simple chalet on the mountainside, after the herd arrived and grazing in pastures overlooking the lake.

It would be another day—two milking sessions—before the making of Mutchli, a semi-hard cheese, could begin. This fresh cheese, which can be aged for up to three months, is smooth, with a fresh bite. It can be slightly salty and lightly sour in flavor, or sweet, depending on the grasses consumed on the alp. Alpkäse, a hard cheese that ages much like Parmesan, will be made later, after the cows are acclimated to their mountain diet. 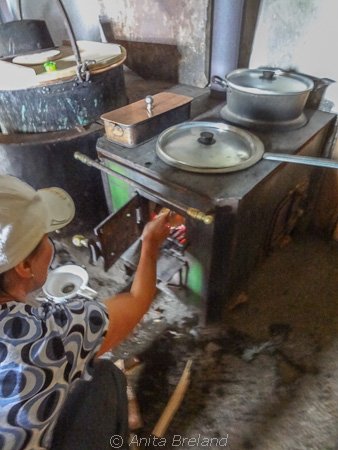 My host Bethli started the walk up to the hut a bit early with a friend, to prepare the food, and I joined them. Along the way, the two made sure I took note of mountain flowers scattered on grassy knolls and around rocky outcroppings: mountains lilies, forget-me-nots, and daisies were all around us. Their cows were headed for a feast of the first order.

Our first order of business was to start a fire in the wood-burning stove, in order to heat water for coffee and tea. After that was done, it was time to lay the table laid with sliced meats and Bethli’s homemade Zopf, butter and jam (yes, she made all three and toted them up the mountain  in her backpack). All set, we stepped outside to admire the view. 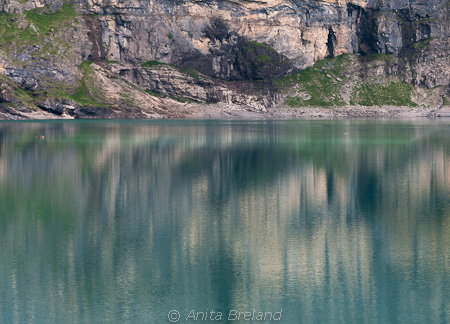 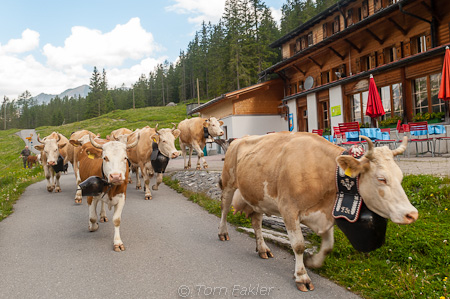 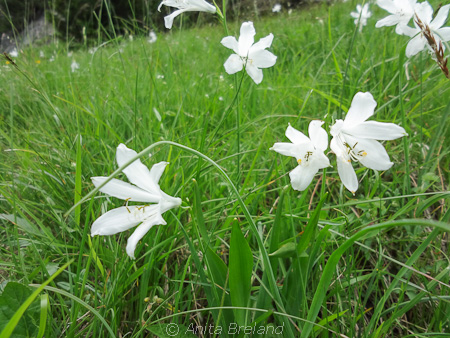 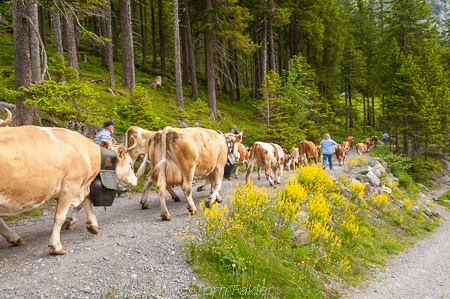 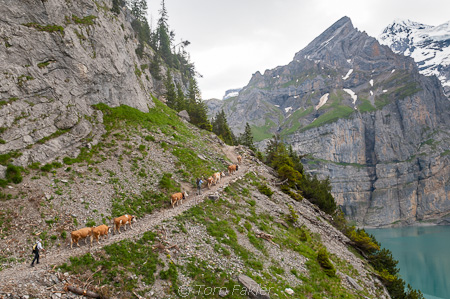 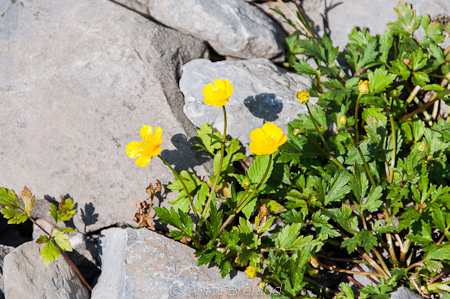 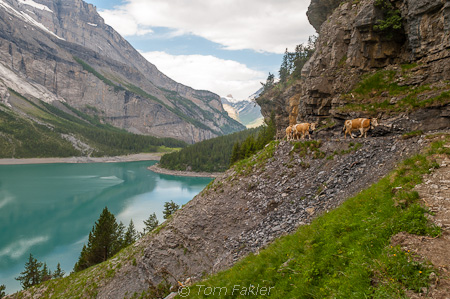 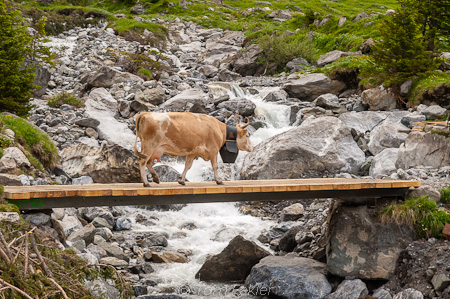 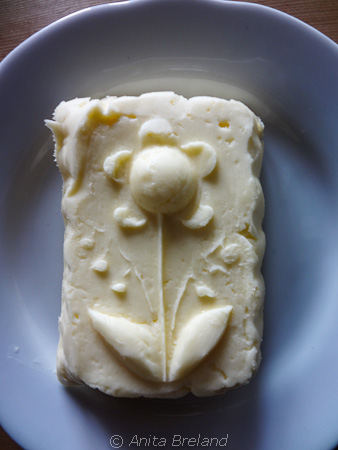 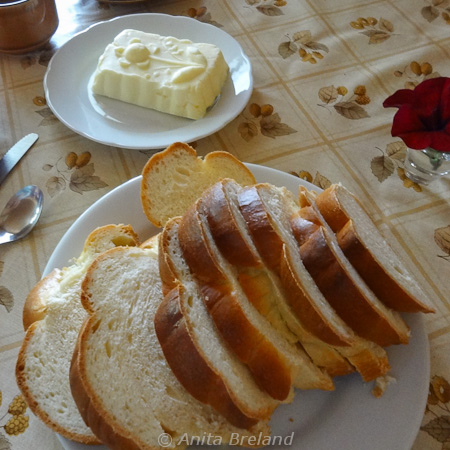 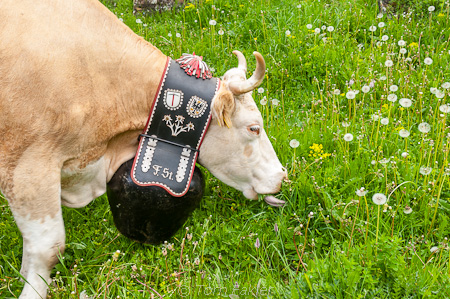 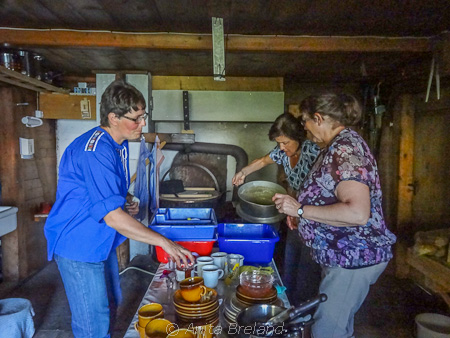 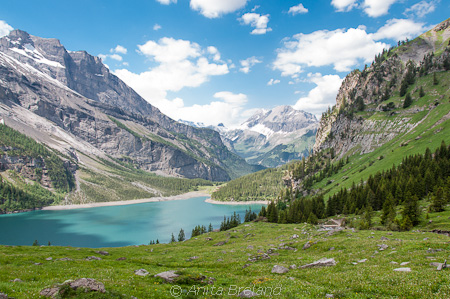 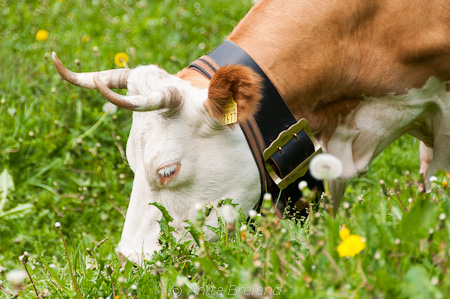 It wasn’t long until the first cows rounded a bend below. Standing next to me, Bethli burst into a soft yodel (!). As the cows headed up toward us, she began to sing a Swiss mountain song—this was a family tradition with its own rituals, and I was privileged to be a part of it.

This summer I’m learning firsthand about making Mutchli and Alpkäse, and life on a Swiss alp. Bethli has already shared her recipe for making Quark. The trick will be to understand her instructions for trimming the portions down, since the recipe calls for 50 liters (!) of whole milk.