Suzani comes from the Persian word for “needle,” used in reference to embroidered hangings and fabric coverings. Collectors also identify the term with the finest old embroideries of Uzbekistan. When it comes to Uzbek suzanis, there is a big difference between an antique piece, such as the one above left, and newer ones, albeit works of high quality, like the one lower right.

My first day in Tashkent landed me and my travel companions in the excellent Museum of Applied Arts.There, a crash course in Uzbek textiles helped us appreciate the distinction.

Suzanis originated along the trade routes connecting Europe, Turkey and China with the Muslim world. The domestic art was applied to hangings, table and bed covers, wrapping cloths, and prayer mats for households and dowries.

As early as the 15th century, Ruy Gonzáles de Clavijo, Castilian ambassador to the court of Timur (Tamerlane), described densely worked hangings and embroidery that probably foreshadowed the suzani. The older pieces now exhibited in museums date from the 18th and 19th century.

I first saw a suzani in Jaisalmer, in Rajasthan, India, a piece that looked much like this one. It was old, and came from Uzbekistan, I was told. I had no idea how many of its cousins I would see just a few months later in Central Asia. In Uzbekistan, suzanis still decorate homes, workplaces, teahouses and public buildings, and are used on festive occasions.

Suzani embroidery is usually done over a cotton, or sometimes silk base, using silk or cotton thread, and very occasionally, wool. Stitches are simple. Natural dyes used for older pieces include indigo for blue, cochineal and madder for red, saffron from the wild crocus for yellow, and pomegranate skins or pistachio galls with iron for black.

Suzanis are now commercially produced, rather than a purely domestic art, to meet the demands of both a surging tourist trade and a local market. They are for sale literally everywhere; and they come in colors that range from bright and bold to delicate and subdued.

Here is a sampling from the Museum of Applied Arts (and the last, a suzani I brought home, from the ladies of the Oblakoulov family near Urgut, using motifs from the region):

For more information, see if you can find “Splendid Suzani”, Caroline Stone’s excellent magazine article from 2003. And for a delightfully personal overview of the details of suzani stitchery, check out another blogger’s post, “S is for Suzani”. 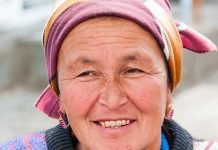 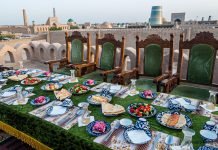 Ulugbek of Uzbekistan—reaching for the stars