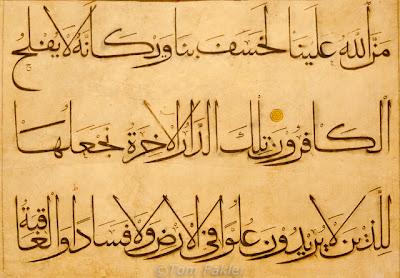 This is a slice of a page from a monumental rendering of the Koran, from present-day Uzbekistan. Almost as tall as a door, it hangs just inside the main entrance to the Metropolitan Museum’s new wing devoted to Islamic art. The book’s turn-of-the-15th-century back story is big, too: according to legend, when the calligrapher was criticized for making a miniscule version of the holy book for a Timurid sultan, he replaced it with this over-sized one, and trucked it to the palace in a wheelbarrow.

The Met’s new Islamic wing, which opened on 1 November, is a stunner. Works in the Galleries for the Art of the Arab Lands, Turkey, Iran, Central Asia and Later South Asia are organized geographically, “to emphasize the diversity of Islamic cultures across time and space”. And that they do, very well. I had the good fortune to visit the new wing a few days after its debut.

In a superb review in The New Yorker, Peter Schjleldahl called the timing of the opening an invitation to a personal Arab Spring. The works surprise in their diversity, even to a visitor with some knowledge of the cultures represented. And the galleries promise to go on surprising for a long time, as curators refresh displays with works still in storage—just 10% of the museum’s massive collection of Islamic art is on show, and there are plans to rotate the works on a regular basis. Illustrated descriptive text posted in each gallery works like sections of a guidebook, helpfully introducing the geographic regions, and the dynasties and patrons that made the works possible.

I envy New Yorkers who can, as Schjleldahl recommends, return repeatedly to absorb the richness of the 15 galleries and 13 centuries in small doses. Here is a sampling from my own first, too brief, visit. 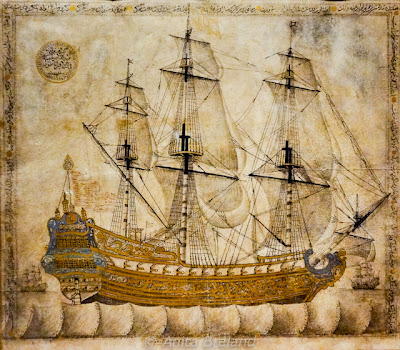 The hull of the ship in this drawing carries the names of the Seven Sleepers, a pre-Islamic tale from early Christiandom that also appears in the Koran. 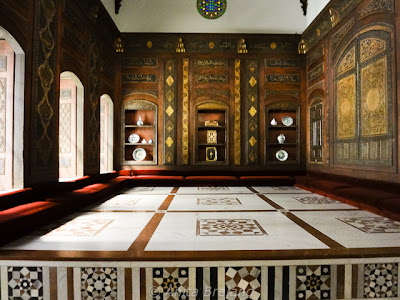 The early 18th-century Damascus Room is one of the few examples of Islamic architecture on display. Nearby, a Moroccan courtyard, with its wood- and plaster carving, and panels of zelij, was installed by a team of artisans from Fez, Morocco. 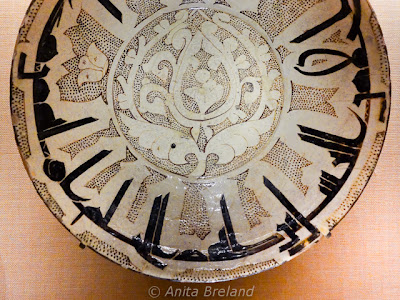 Exquisitely detailed ceramics from all over the Islamic world are here, and like just about everything in the collection, in mint condition.  This is just one of the many bowls that made me want to make a beeline to the museum store to look for a replica. 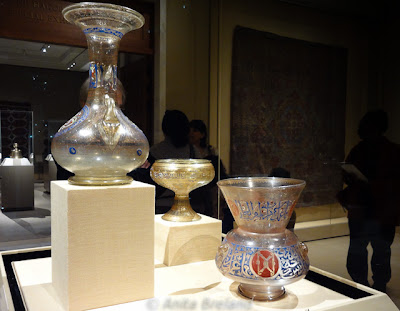 Intimate displays make it easier to take it all in. Subdued spot lighting pulls the visitor through the galleries, past exquisite artifacts, such as mosque lamps and vases from Iran. 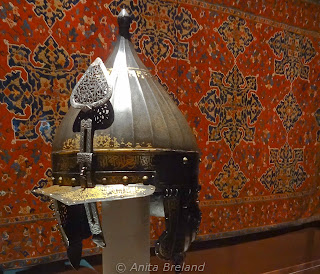 Fabulous carpets are displayed in a  palace-sized room under a ceiling of carved wooden panels. Each one is a royal treasure. 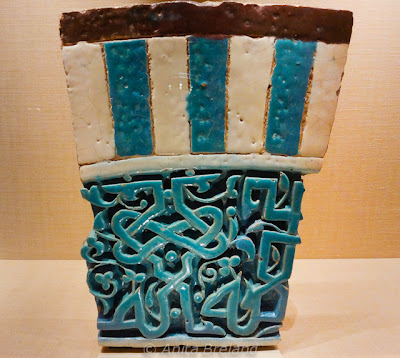 This tile fragment, with its calligraphic inscription, once formed part of a larger decorative scheme on a façade in Samarkand. I look forward to seeing entire buildings covered with tile work such as this, when I make my own Uzbek journey in a few months time.

The museum curators’ stated aim for the new wing is to dramatically widen viewers’ perspective on Islamic culture, by showing its contributions to the world’s shared cultural heritage.

They have succeeded, brilliantly. 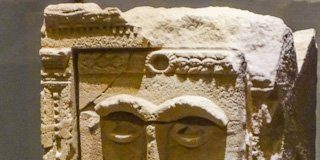