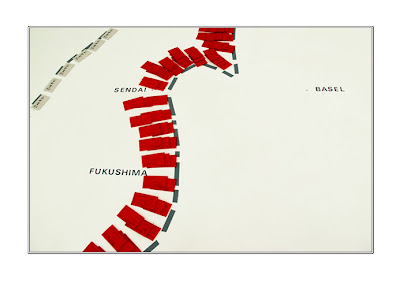 Ingo Gϋnther’s mapping of Japan’s shoreline of Japan on a section of gallery floor space was a highlight of Art-Aid: Basel Project for Japan, a recent exhibition in Basel’s St. Alban district. Gϋnther, known for his globes that visualize social, political and environmental issues, highlighted the devastated region with packets containing pine tree seeds. Viewers were encouraged to take a packet and plant the seeds, helping to grow a global Tsunamischutzwald, or protective forest, by participating in the Thanks a Million project.

Art-Aid challenged perceptions of disaster, with a particular emphasis upon the March 2011 earthquake and tsunami.  On view alongside Art Basel Parcour, it was a powerful expression by five artists with deep connections to Japan: Gϋnther, Senji Ohmaki, Yoko Ono, Joseph Beuys and Naoya Hatakeyama. 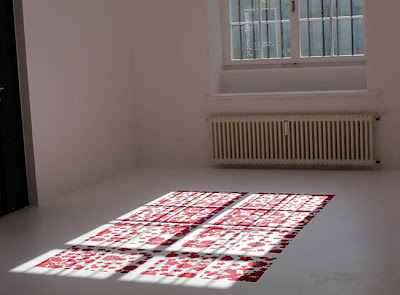 Shinji Ohmaki choreographed floral patterns beneath a window, an installation of pigments and sunlight that encouraged contemplation of transience, eternity and the sublime. 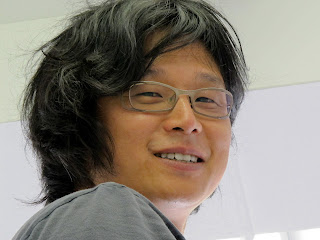 The artist was there on my visit, recording the movement of shadows across the piece in the light of a late afternoon sun.  He is preparing another installation for a Basel audience over the coming weeks, and promised to provide details on his website, when they are known. 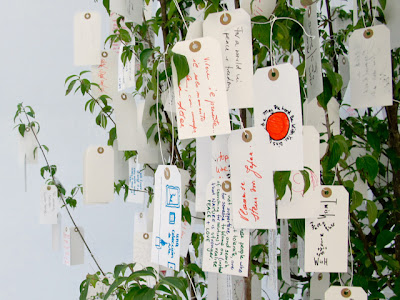 Yoko Ono’s Wish Tree was placed under a skylight. Its branches were thick with hand-written cards. “A dream you dream alone is only a dream. A dream you dream together is reality,” says Ono. Wish Tree was inspired by the Japanese practice of writing messages and tying them to a tree at shrines. The installation has been widely exhibited sine the 1990s. 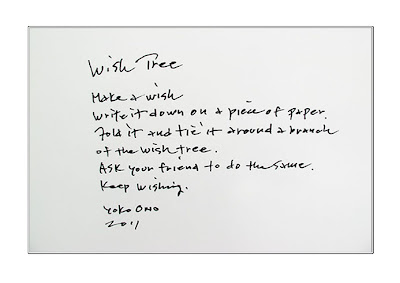 Art-Aid also invited viewers to contribute to Japan’s renewal through donations, helping to raise scholarship funds for children, especially those who lost their parents as a result of the disaster. The exhibition was co-sponsored by the Embassy of Switzerland in Tokyo and the Embassy of Japan in Switzerland.

The works were positioned in an all-white display space with natural lighting. As visitors padded about in stocking feet, the only sound was the murmur of helpers offering explanations of the works and the artists who created them. The experience was one of simplicity, dignity and inspiration.

Pandemic Terms: The New Lexicon for Travelers moretimetotravel.com/pandemic… via @MoreTime2Travel

What better way to mark 10 September 2020, aka Port Wine Day, than with a glass of port wine? Tom and I are partial to tawny ports and the 1976 colheita from Pocas delivered: smooth, complex, altogether wonderful on a balmy late summer evening at Wine Qu… instagr.am/p/CFDa8gdprTe/ pic.twitter.com/5MR2Ron7mP

Where did August go? Some days began in a cloud-on-the-ground of fog, others blew into town with gusts of chill breezes. No matter. Late-summer Porto offers plenty of blue-sky moments, irrestible invitations to step outside and look up. instagr.am/p/CEmEoiapy48/ pic.twitter.com/FHXOQ76PLy

Thai red curry chicken...a flavorful way to learn my way around Instant Pot cooking. I've resisted jumping on this bandwagon for a decade...if not now, when 😏 ?!? instagr.am/p/CDcTw2mp5i4/ pic.twitter.com/rtJv3olV2Z

A recent addition to Porto''s many "staircase streets", this one-way escalator is a boon to residents of the houses clinging to the hillside above the Alfandega. Stairs alongside are there for the trip back down. instagr.am/p/CDBCF3upNUH/ pic.twitter.com/PriPBSFY8z

Almost noon on a summer day in Matosinhos...just an hour earlier this would have been a colorful boardwalk scene under a bright blue sky. 😎 instagr.am/p/CC3PvPhglkx/ pic.twitter.com/aMQaGVRnPi