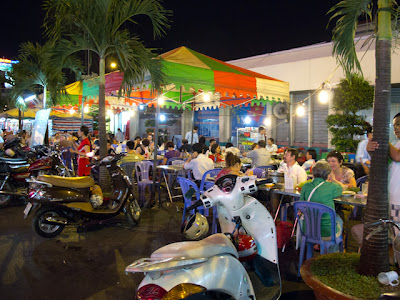 In the evening, the streets on either side of Saigon’s Ben Thanh Market sprout bustling restaurants, set up after the daily market closes at dusk. The night market gets going about 7:00pm, and does a brisk business until late in the evening. Narrow side streets are lined with souvenir stalls, but it’s the restaurants that got my attention. 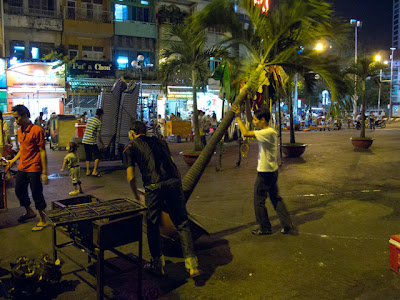 I watched as potted palms were wrangled into place, lights installed, and fires lit. Grills and cooking trolleys were wheeled out and cooks and serving staff took their stations. In less than 20 minutes canopied tables and street-side kitchens were in place, menu boards up and orders being taken. 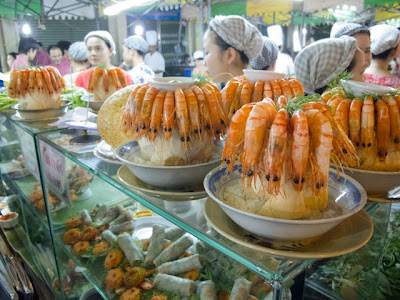 Prawns steamed in coconut water (and in a coconut) appeared to be a bestseller at one restaurant, with tray after tray of them headed for the canopied tables. I wish I had noticed this before ordering a lackluster dish of clams with garlic. Next time! 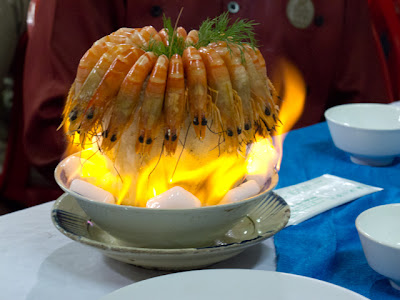 At the next table, a waiter lit squares of what appeared to be Sterno to heat the coconut and get the coconut water steaming. After a few minutes, he peeled the prawns before putting them into the coconut for a final few minutes of cooking. 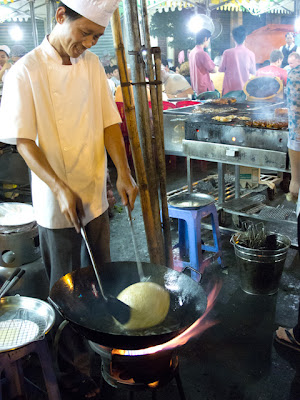 Out front, a specialty cook worked his magic at a wok placed over a gas fire, coaxing what looked somewhat like an oversized sopapilla into shape. With two long spatulas, he tossed a small ball of wheat dough in hot oil, constantly rotating and flattening it until, suddenly, it puffed up to ten times original size. At the moment it reached maximum dimensions, he popped his creation of crispy wheat and air out onto a plate, and started again with a new ball of dough. 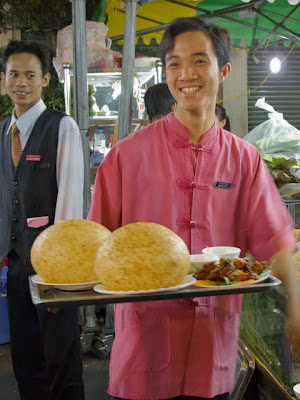