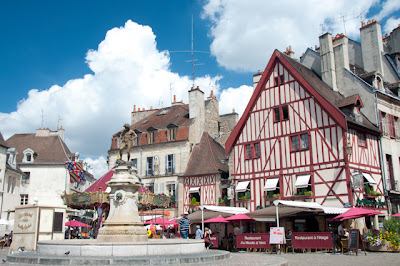 Place François-Rude is at the heart of Dijon’s pedestrian zone. The capital of Burgundy is visitor-friendly, its compact historical center chock-a-block with parks and plazas, splendid architecture, and good food. On a weekend visit last month, I was fortunate to have sunny days, and at times it seemed I had the place mostly to myself for two days of museum-hopping and meandering the medieval streets. 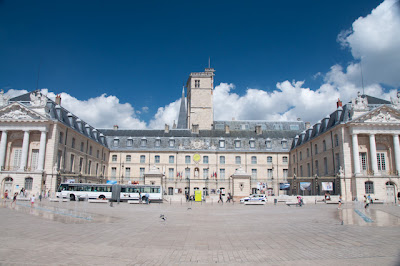 The Musée des Beaux-Arts, one of France’s largest, is housed in a former ducal palace fronting the Place de la Libération and topped by the tower of Philip the Good. The high points for me were the building itself, with vast, domed kitchens and the Salle des Gardes with its treasures from the Chartreuse de Champmol, on the outskirts of Dijon (a Carthusian monastery before the Revolution, what’s left of it is now part of a psychiatric hospital). 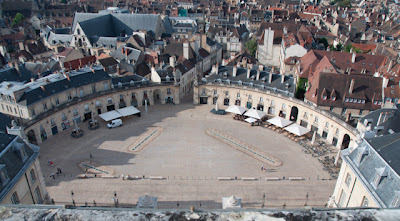 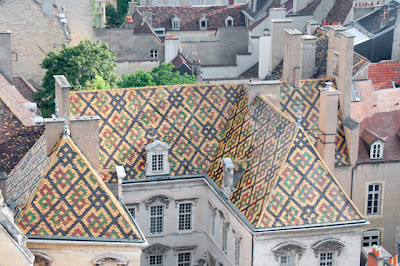 I climbed the tower’s 316 steps to catch a view of the semi-circular Place de la Libération below, and rooftops crowned with tiles. 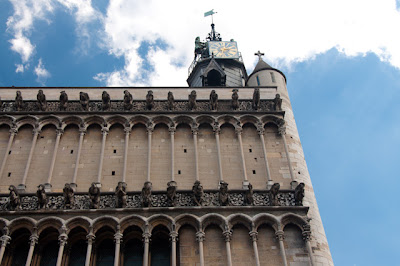 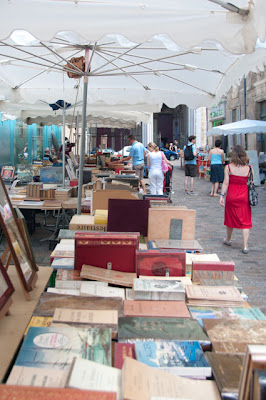 Philip the Bold’s Jacquemart family clock atop the Notre-Dame church stands guard above a street market in the lanes abutting the church. Jacquemart, the figure of a man with a hammer, began striking the bell of the church clock in 1500. A century later, the citizens of Dijon gave him a female companion. A hundred years after that, the couple was given a son, Jacquelinet, who strikes the half-hours. In the late nineteenth century, a daughter, Jacquelinette, began striking the quarter-hours. The busy family is still at it. 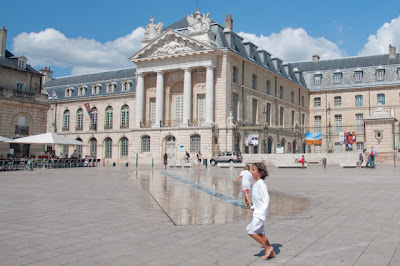 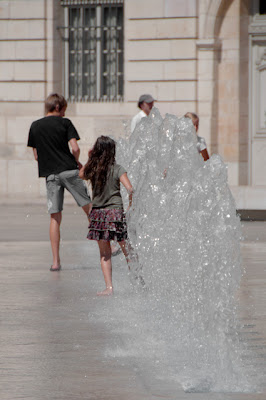 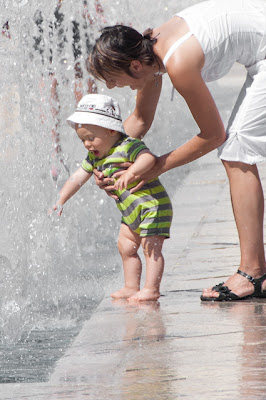 The Place de la Libération has kid-friendly fountains, and in the evening, is a great place to take in a moon that rises behind the Palais de Justice above fountains spraying in technicolor hues. 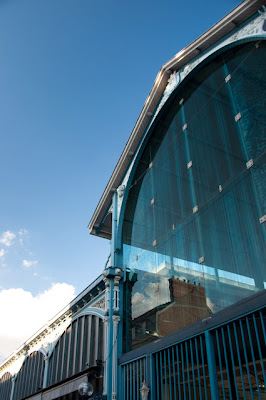 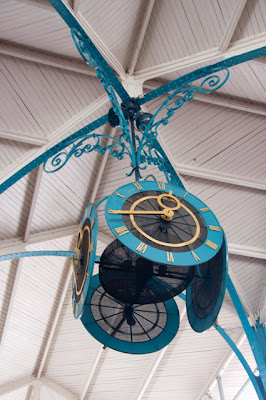 The airy cover of Dijon’s market was designed by Gustave Eiffel for his hometown. I arrived too late to take in the bustle of Saturday buying and selling, but could admire the building. Definitely worth a return visit when the market’s going strong.

I tried a nearby restaurant. The meal provided two of the best, and absolutely the very worst, taste sensations of my time in Burgundy. To start, a sturdy crab-meat gazpacho, made with sun-dried tomatoes, had a pleasing earthy kick. It was served in a trendy bar glass, on a slab of black slate sprinkled with paprika—fun to look at and a delight to eat.

The main course of perfectly spiced and grilled prawns and scallops came with a daunting-but-tasty mound of young leaf lettuce—and a gloppy raspberry-flavored risotto topped with mustard sprouts, glue-like with no discernible rice grains! Yech. The dish bore no resemblance to the sublime strawberry risotto that piqued my taste buds in Florence a couple of months ago. Note to self: You are in France. Go with it.

Lamentable risotto excepted, my weekend in Dijon was sublime. 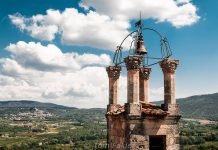