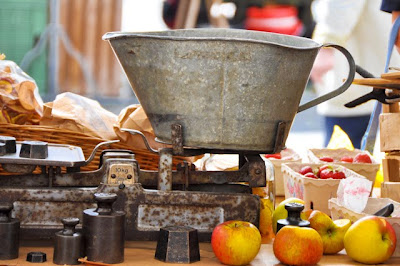 A stroll through Basel’s Marktplatz on Saturday just about turned me into a fruitarian. From leafy greens to apricots piled high and yellow in the sun,  it was hard to know where to look next. Then I found the bustling fruit stand of the family Fuchs.

Shoppers crowded round the canopied stand, snapping up apples, cherries and strawberries from the Tϋllinger hill just across the German border. Cherries by the handful went were weighed in the tin bucket of an old-fashioned scale and scooped into brown bags. They looked great, but my eyes were on the strawberries. “Symphonie!” sang Herr Fuchs, as he doled out samples of the three types on offer, slicing the larger berries in half. Hands reached out from all directions. I joined the fray, as he extolled the virtues of Polta, Symphonie and Sonata berries, and refilled his sample baskets.

The Sonatas, sweet without a hint of sour, were not as assertive as Poltas or Symphonies. It was hard for me to choose between the Symphonies, with a sweet-and-sour note, and Poltas, incredibly sweet and aromatic; in the end, I came away with a 500-gram basket of Symphonies.

The friendly Fuchs family stand operates through the season, from Tuesday to Saturday. In addition to the luscious fresh fruit, they offer home-dried apple slices, marmalades and fruity vinegars, reasonably priced.  It’s sampling the fresh stuff, though, that makes an early summer market visit such a treat.