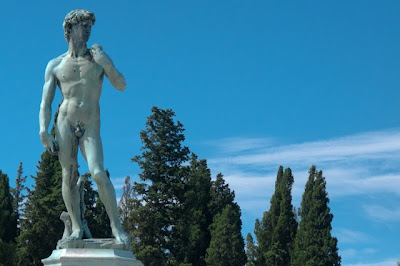 The #12 bus from Santa Maria Novella station rounds the Fortezza da Basso, then turns back and crosses the Arno, before winding its way upward to San Miniato al Monte through affluent suburbs. Nipping past the Porta Romana and the upper entrance to the Boboli Gardens, the #12 brought me to Piazzale Michelangelo, and its breathtaking view of Florence.

I disembarked into a vortex of maneuvering tour buses, a replica of Michelangelo’s David poised serenely above the fray. Silhouetted against sky and trees, he appears oblivious to the photo-snapping hordes and souvenir venders at his feet. 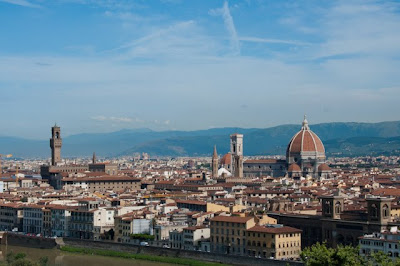 The outlook from Piazzale Michelangelo is both far-reaching and intimate, and the promontory is big enough for the endless streams of humanity disgorged by the buses.  Best of all, after taking in the view, it is pleasant to walk down the hill, following a shaded path sided by benches. 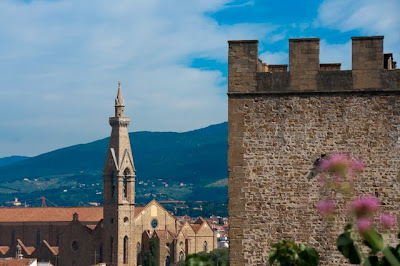 At the bottom of the hill, the 14th century tower in Piazza Giuseppe Poggi signals the entrance into the working class district of Oltrarno at its easternmost end. From the tower it is a short walk along the river to the Museo Bardini, and another five minutes to the Museo della Fondazione Horne, crossing the Arno via the Ponte alle Grazie.
Both museums were built around the bequests of private collectors: Stefano Bardini, an early 20th century art dealer; and Herbert Percy Horne, an English art historian who moved to Florence at the end of the 19th century. The Bardini was closed when I passed by, but the Horne proved a wonderful place to pass the hottest part of the day.
This summer, along with Galleria dell’Accademia, the museum is a venue for the exhibition “Virtues of Love”, a selection of striking nuptial paintings on fifteenth century wedding coffers. The handful of exhibition chests are scattered among the museum’s permanent collection of art, furniture, ornamental and domestic objects.

Kyrgyz felt travels its own Silk Road to high fashion

The Milan Duomo at sunset