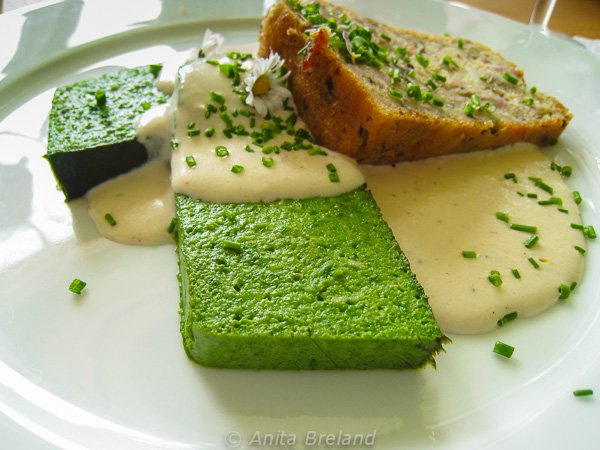 ‘Annoying’, ‘vexatious’, ‘irritating’, ‘teasing’—Spring this year is all of these things. After a few glorious weeks of forsythia, daffodils and crocuses, came the rains, gray skies, dropping temperatures.  We had a playful peekaboo sun early in the week, then a hailstorm trashed my herb garden.

On a Sunday afternoon cycle into France during this spring’s false start, I stopped for lunch at La Couronne d’Or in Leyman, just across the border. The restaurant offers a full menu through the day, which makes it an ideal destination outside standard mealtimes.

The restaurant is both stylish and casual, its menu seasonally tasty. For an appetizer, I had terrine d’ortie, a flavorful nettle terrine, served with bacon-studded quick bread and horseradish sauce. My perfect slice of green was followed by a fish gratin that deserved more appetite than I could summon. My companions asked the owner to identify the terrine ingredients, which we had guessed to be everything from parsley to cheese or eggs. “Seulement d’ortie,” Madame, he replied. “Only nettles!”

A week ago, I joined Jack and Silvia of Laughing Lemon for an evening of cooking with springtime veggies. We made a rhubarb-strawberry pie. We sampled Italian tomatoes, Swiss radishes, raw asparagus and yes—raw nettles. And for me, who adores any kind of risotto, there was something new to try: risotto with white asparagus and nettles as the signature ingredients.

The nourishment of nettles

Nettles are not exactly a designer foodstuff. After all, they can be had for free along the roadside. But they’re chock full of vitamin C and other antioxidants. They kept much of Europe nourished through two world wars.

A little foraging online brings up more information than one home cook needs to know, but I like Austerity Kitchen’s post on the weed (complete with an instructional rhyme). And thanks to Smithsonian Magazine, I’ve added this recipe for nettle soup to my repertoire.

Said to be the remedy for everything from asthma to hair loss, the claims for the health benefits of stinging nettles are many. I like them because they’re bright green and scream “Spring!” Until the real thing is well and truly here, that will have to suffice.

Update, spring 2013: This is my contribution to Spring Fever, a blog carnival hosted by Traveling with Sweeney. Join in, and leave us with your thoughts on Spring!