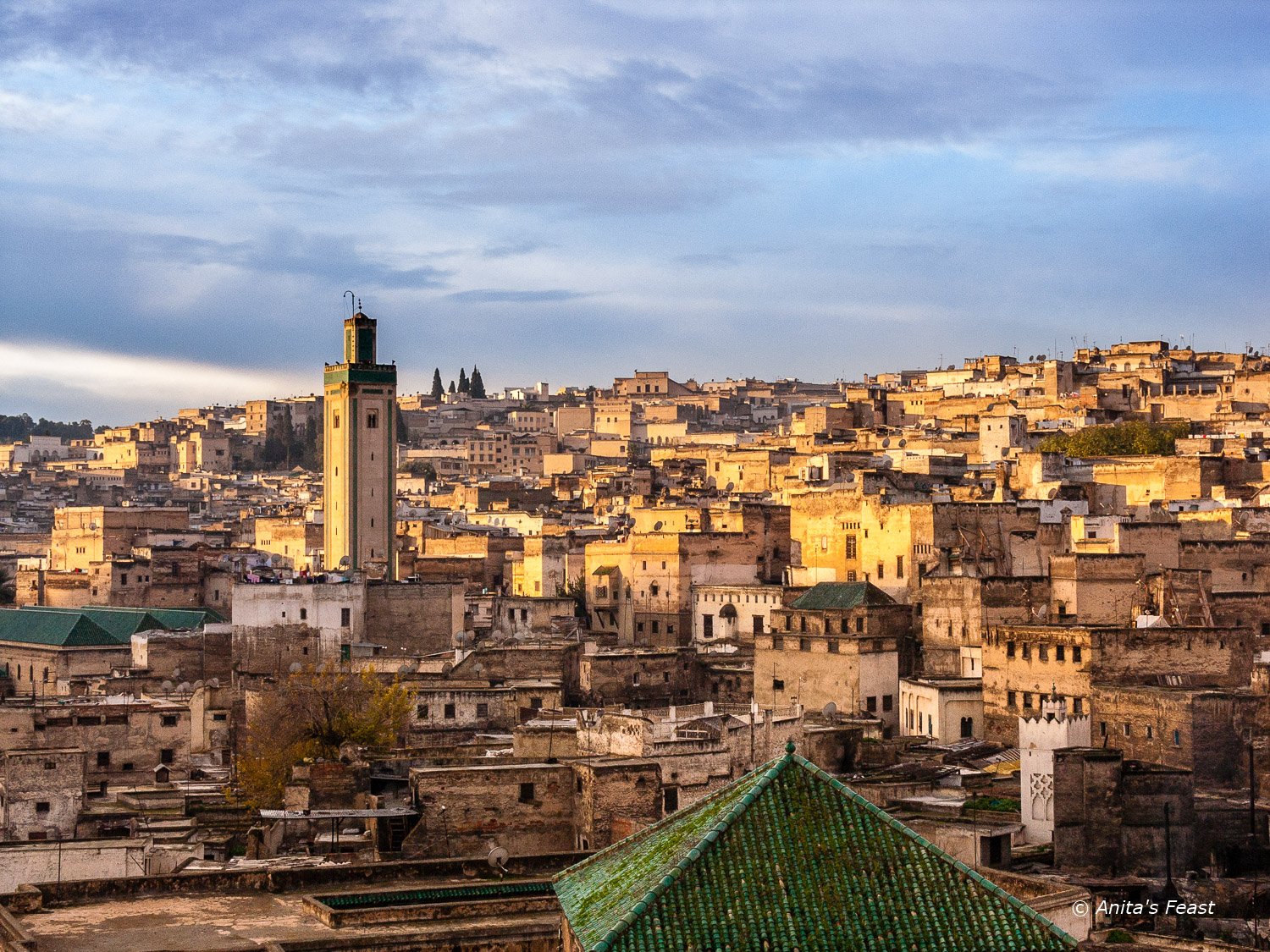 I learned to make tagines, bread, and salad at the proverbial knee of several Moroccan home cooks and one very good Berber chef, Lahcen Beqqi. The visit of a good friend offered a great excuse to crack out recipes I’d first practiced in the Fez medina, as well as an opportunity to brew up a good pot of mint tea (without most of the sugar). 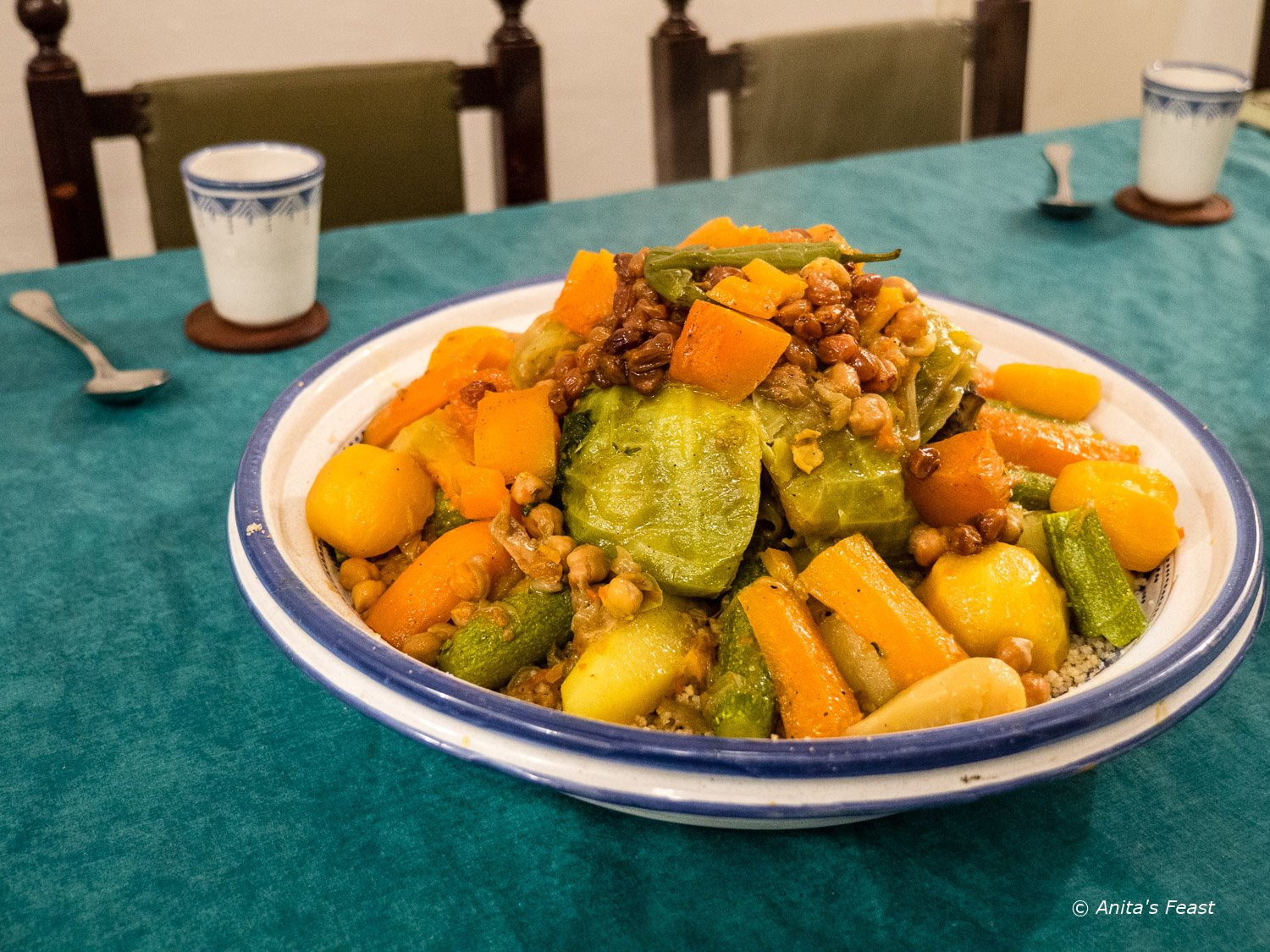 After a morning in the kitchen, the scent of cumin filled the house. The Moroccan salads were good to go. After marinating the chicken for a tagine, it was time to tap into my stash of preserved lemons, and set the oven to “delicious”. Out came my makeshift steamer for the couscous, the tea glasses, a brass tray and my favorite Berber teapot.

The bustle in a now-crowded Swiss kitchen called to mind several heady days in Moroccan homes, learning from efficient home cooks. They seem to turn out a feast for a crowd effortlessly, wielding little more than a paring knife, a pressure cooker, and family secrets handed down for generations. This time around, for my guests in Basel, there was a bit more culinary fluster, to be sure. I would serve store-bought flat bread (“Morocco Fladen” from a local bakery’s wood-burning oven), but everything else was exactly as I’d practiced in Fez.

We started with small bowls of vegetarian harira, a light version of the traditional soup Moroccans eat to break the Ramadan fast at sunset throughout the Muslim holiday month. On a snowy Swiss evening, the richly flavored broth with its aroma of cilantro and freshly squeezed Meyer lemons scored from a nearby supermarket’s recent California Week was just the ticket. 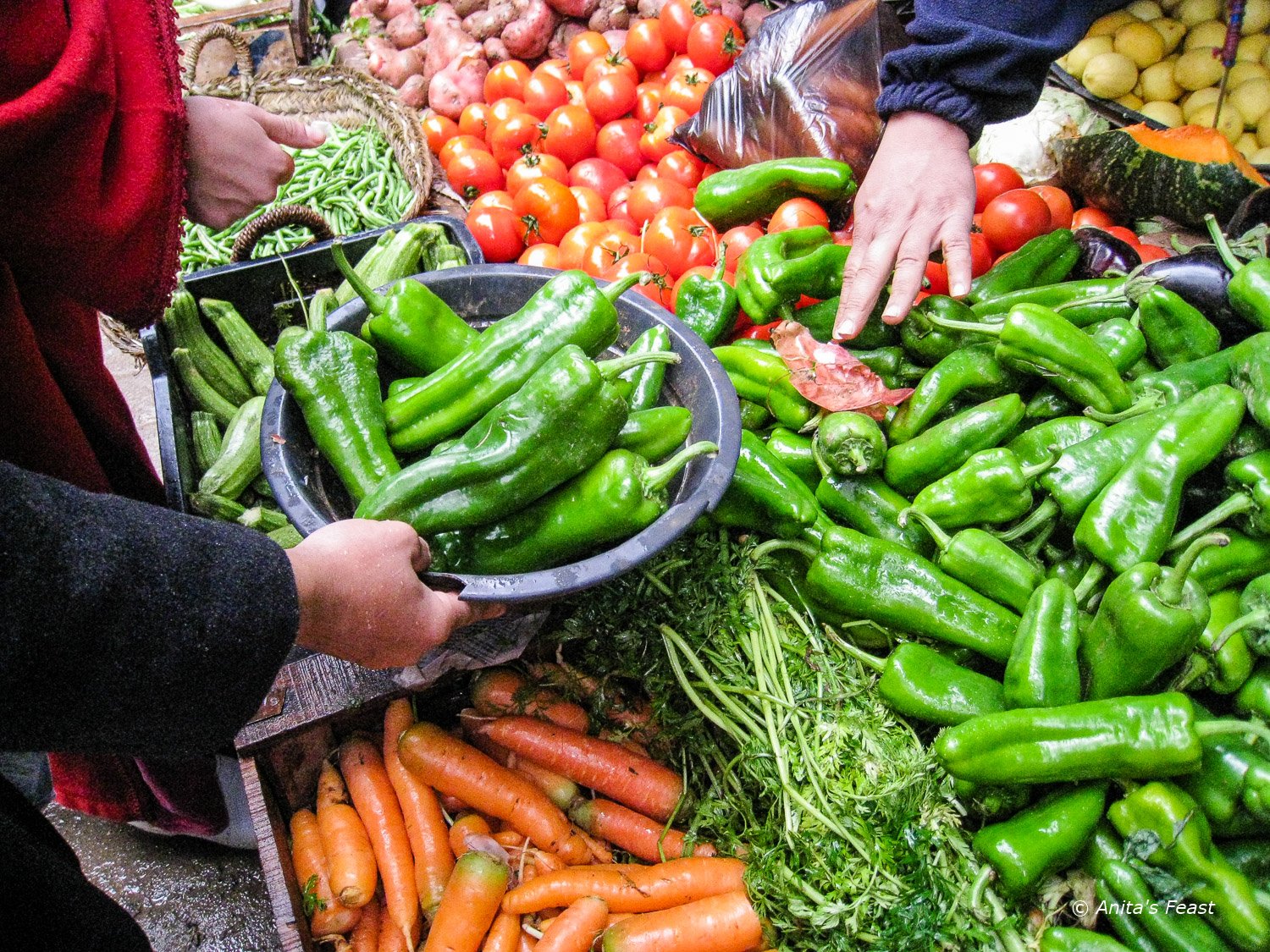 Then the salads: garlicky smashed zucchini, beetroot with cilantro, oven-charred cauliflower tossed in toasted spices and olive oil. The one most enthusiastically received, though, was Lahcen’s carrot puree with feta cheese, definitely on my do-again list. The tagine was saucy with green olives and slices of preserved lemon, and served with couscous steamed twice over veggies, after Lahcen’s mother’s favored way of doing things.

For dessert, Myra Kornfeld’s vegan carrot cake with cardamom drizzle (from The Voluptious Vegan) may not have been authentic, but the flavors melded with the complex ones that had gone before. We finished with Clementines and frothy mint tea.

Wonderful about Moroccan feasts are the copious leftovers that result when you follow the traditional market dictum to start with a kilo of just about any ingredient from olives to potatoes. Buying by the kilo keeps the shopping simple, the costs down and the quantities ample…and makes for sumptuous leftovers.

Since I served only cooked salads for this dinner, they’ll be great sides for the next few days. Leftover chicken tagine works well for sandwiches or shredded as toppings for a salad of field greens and drizzled with argan oil. Anything to keep those flavors around for another taste! 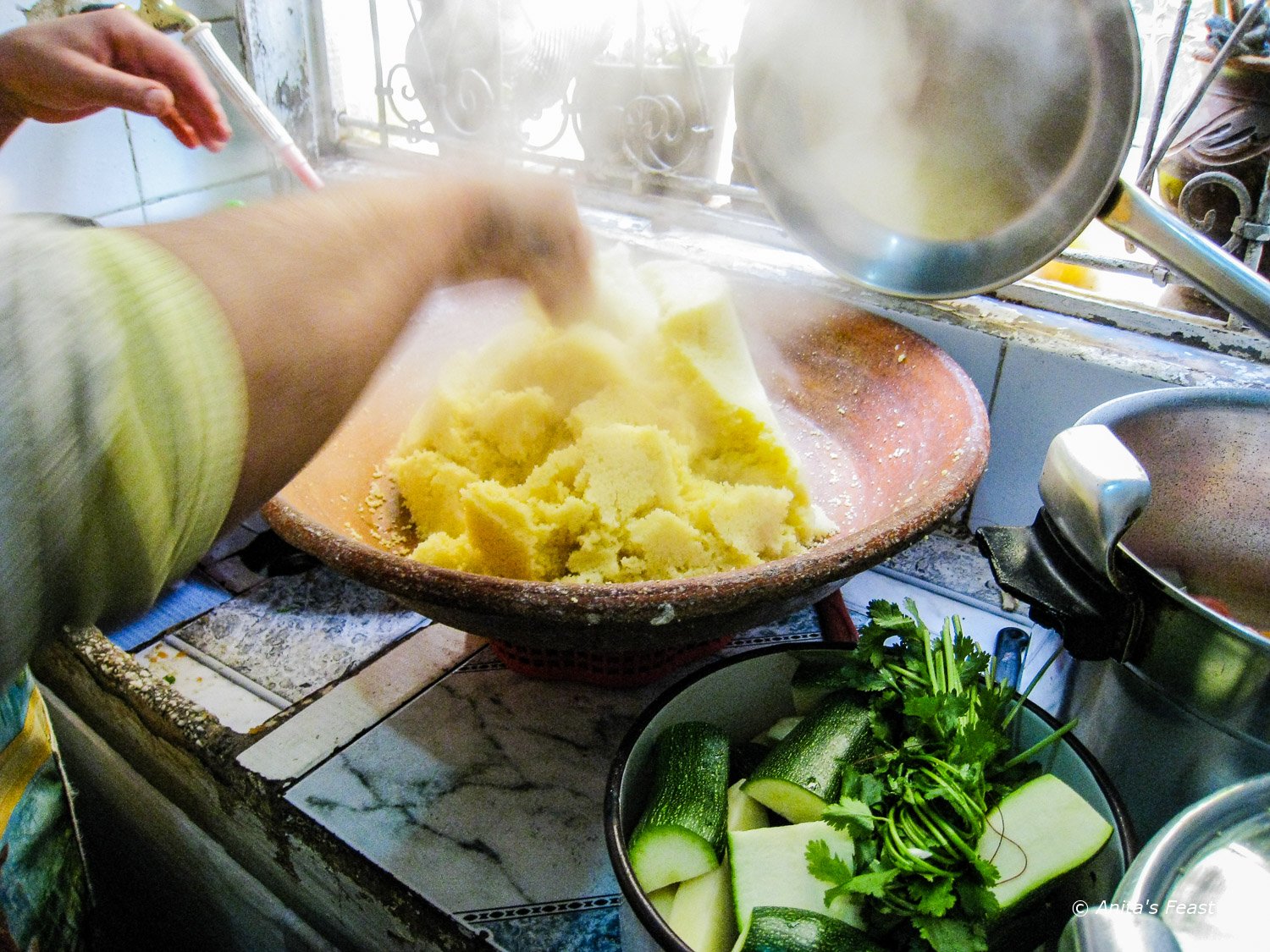 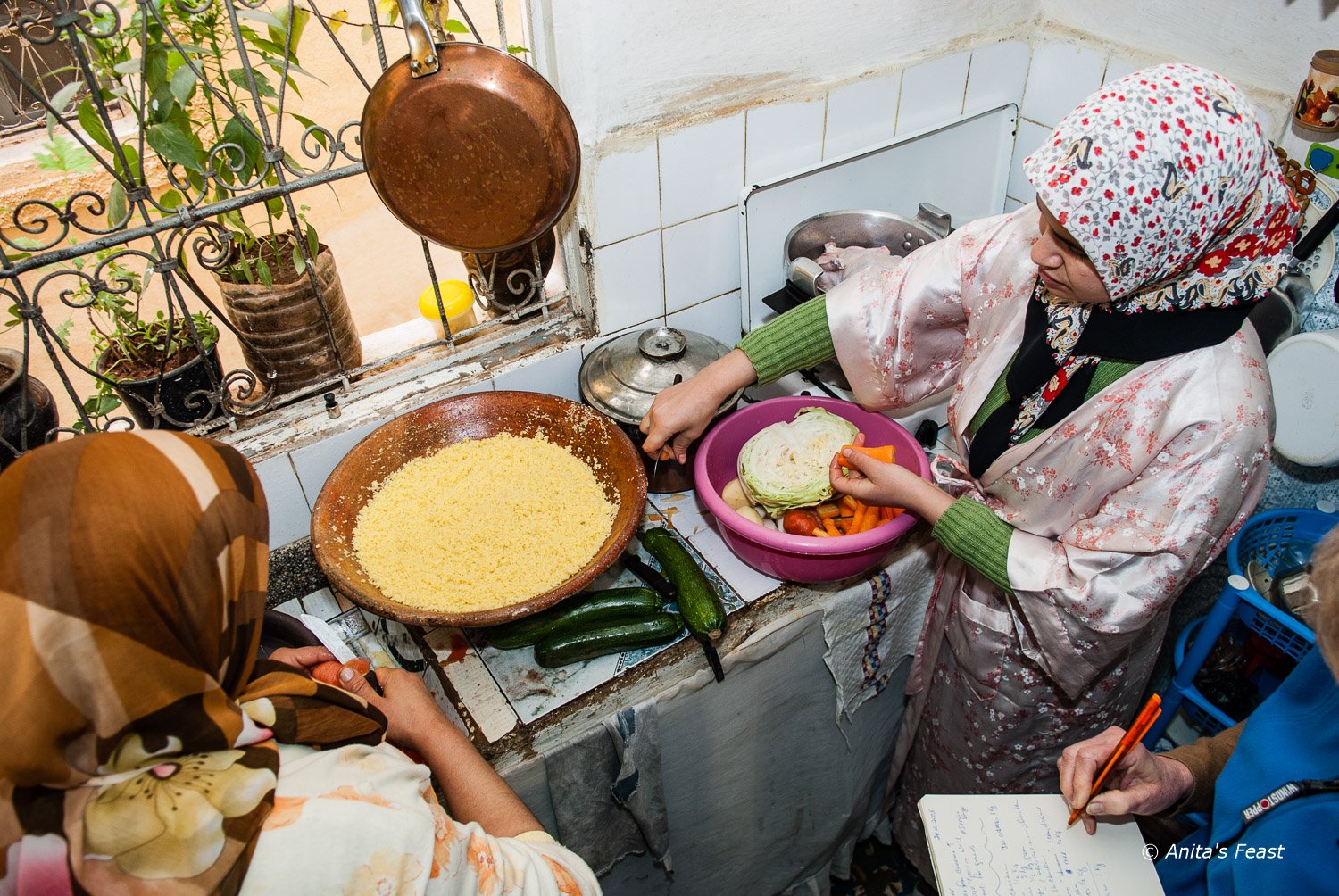