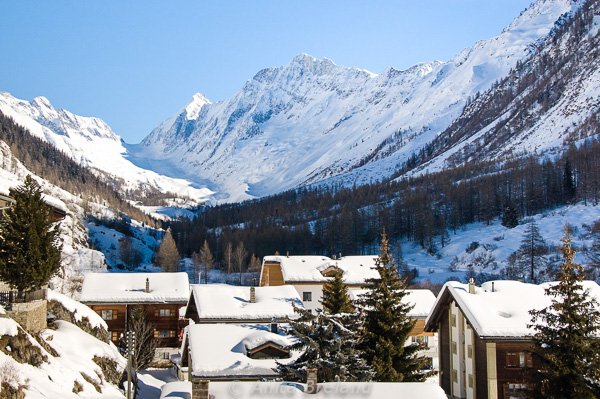 Legend has it that Raclette, a dish born in the Swiss canton of Valais in the 16th century, resulted from an accidental meltdown of hearty alpine cheese, left by a hunter or shepherd on a hot stone too close to his campfire.

Not wanting to waste a morsel of the aromatic stuff, he scraped it onto boiled potatoes. He probably had a rasher of air-cured beef or bacon in his pouch, and a flask of Schnapps to wash it down.

Elevated status for the humble raclette

Over the centuries, this outdoor meal moved indoors and condiments were added. With development of the wine and ski industries in the Valais, Raclette became central to après-ski and guesthouse menus. Today, it is one of Switzerland’s purebred agricultural products, and for many, is preferred over Fondue, Switzerland’s other national cheese dish. Last October, I visited an artisanal Raclette cheesemaker in Orsiere, and learned about the care with which each round is brought to market.

Not long ago, my Swiss neighbors showed me how to put on a sure-to-please Raclette evening, in an atmosphere that evoked their tradition’s rustic roots. They transformed bare loft above the bike sheds behind our apartment building  into a mountain chalet. Inside, they draped picnic tables and windows with red tablecloths and curtains, and hung Swiss flags and posters of the Matterhorn and Eiger, along with skis and mountain-climbing gear. The evening began with an outdoor buffet of air-cured meats, brown breads, cornichons and walnuts. Alpine music wafted across the courtyard.

To be fair, the meaty, nutty beginning to our meal was not that of a purist. The meats included air-dried beef from Grissons, bacon from the Berner Oberland, and home-made walnut bread from Basel. And we popped the cork on a bottle of champagne to celebrate our mostly traditional mountain meal.

After the apero, to the sound of Alphorn music from someone’s iPod, we moved into the loft for the crowd-pleasing main dish of cheese melted over potatoes, the cheese heated and scraped at a time-honored pace. It took three Raclette Meisters an hour to serve everyone a first helping of Raclette, so there was plenty time for conversation to get things going. Three half-rounds (weighing in at 7.5 kilos) of Natur cheese from Verbier —just cheese, free of fancy flavorings—served 25 people. The go-withs were few: steamed Charlotte potatoes in their jackets, cornichons and tiny pickled onions, set out alongside paprika, curry powder and pepper mills.

Drinks were simple too: chilled Fendant wine, also from the Valais; a light-bodied Cote du Rhone; and black tea. With the second or third round of Raclette and potatoes, out came the firewater: Abricotine, Schnapps made from tart Valais apricots; and Kirsch. We finished the meal with a dessert of poached pears, Clementines, and brownies.

This truly Swiss occasion was clearly a nostalgia trip for my neighbors, as well as an authentic evening to remember for this expat. It trumped my earlier “tourist-style” Raclette dinners, with the little table-top pans and forbidden ingredients, like salad.

Our raclette evening was also an excellent lead-in to the “gourmet raclette” evening hosted a few weeks later by another neighbor, a Parisian who brings panache to every meal she hosts. That meal involved a move indoors to the dining room, and featured oven-warmed Mont d’Or, spooned over potatoes–and for that occasion, a salad!