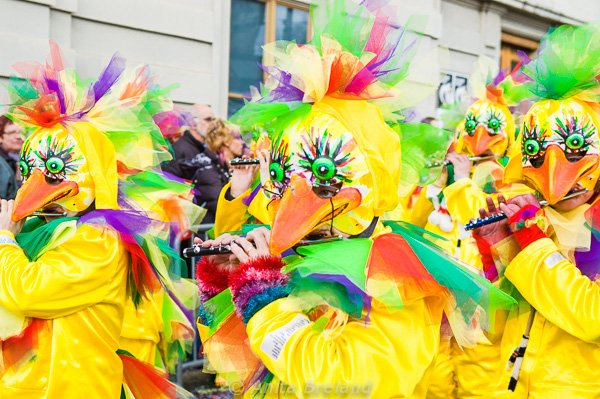 Four days ago before dawn, Basel’s carnival opened with a bang. More than any other event on the city calendar, Fasnacht, called “the three most beautiful days” by Baslers, defines the character of the city. It’s bigger than life, politically savvy, and an insider’s heyday of pipes, drums and (mostly) controlled mayhem.

Lots of people leave town to avoid all the confetti-flinging and music-making. I’ve done the same in past years, but this time, I stayed in town.

Gluttony for the ears and a feast for the eyes, Fasnacht is not about haute cuisine. Its signature foodstuffs are those of what is, after all, a Lenten affair: “Fastenwähen”, an airy pretzel-shaped bread spattered with toasted cumin caraway seeds, tender and sweet “Fasnachtskiechli” onion pies, and “Basler Mehlsuppe”, gruel made with a flour roux and a dollop of Swiss wine, and sprinkled with grated cheese. For some, the soup is an acquired taste, but I rather like it. And I really like the pretzels!

Savory snacks, a night on the Munsterplatz