Painted images are highly valued as tools representing the teachings of the Buddha. Buddhist wall paintings representing protector deities line the walls of temples across Nepal and other countries in the Himalayan region. The sketch above is the basis for the first decoration in the sacred center of the Chhairo Gompa in the country’s Lower Mustang Region.

An expert guiding the work 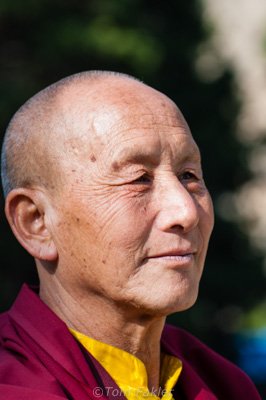 Lama Shashi Dhoj Tualachan of Chhairo Gompa is a world-renowned thangka painter as well as a Buddhist monk. He has overseen the gompa‘s restoration from the beginning and since 2004, has worked with volunteers from Restoration Works International (RWI).  After years of preparation, the fine artistry of Buddhist wall painting has begun.

Shashi Dhoj belongs to a family of artists dating back generations. The family has been responsible for many of the sculptures and wall paintings in Chhairo and other gompas in the area.

A Tukuche native, Shashi Dhoj was instrumental in the rebirth of the Chhairo Gompa and provides a modern-day link to the ancient Tibetan Buddhist traditions. He is also working to establish a traditional Buddhist art center that will provide training to both the monastic and secular communities at the monastery.

The wall paintings are done in seven distinct phases: preparing the walls for painting, making the paint, placing the guidelines on the walls, sketching out the designs with charcoal, painting in the main outlines, filling in the outlines with paint and finally, painting in the faces of the deities.

Master Shashi Dhoj sketches the designs and finalizes the paintings. At Chhairo Gompa, Shashi Dhoj ‘s assistant, his brother Chakra, along with RWI volunteers have provided help with the other steps in the process.

Preparing the walls and paints

Buddhist wall painting begins with plastering and applying two coats of whitewash. After the walls are ready, paint is prepared on-site by creating a gelatin base. This involves boiling cowhide for several days and straining it to remove lumps. A small pot of each color is mixed until a smooth consistency is reached. This can take up to 30 minutes per color. Because the paint contains gelatin, it must be warmed before it can be applied.

While the paint is being made, the artist measures and places guidelines on the walls using a chalk line. After the guidelines are drawn, he sketching the base design with charcoal. Painting over the outlines with a very fine brush making the m permanent.

Outlines in place, it is time to add color. For this, Shashi Dhoj’s assistant, his brother Chakra is the colorist, filling in outlines with vibrant hues. The final step will be to paint in faces of protector deities. The completed works will eventually cover all four walls of the gompa‘s sacred center.

The restoration work long underway at Chhairo Gompa has reached the stage for bringing the walls of the interior rooms of worship to life with paintings of protector deities.  Wall paintings Chhairo Gompa will have the same dynamism as another work by Shashi Dhoj that I later visited in Kathmandu. There, the lama’s wall paintings decorate the public veranda of a temple..

Once that is done, only  monks will be allowed into this space. Until then, RWI volunteers have a marvelous opportunity to see a master at work.