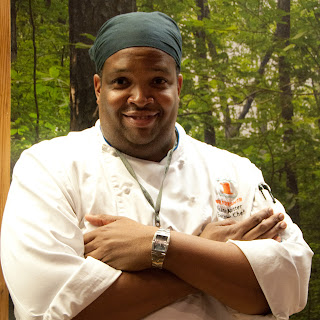 Earlier this month, I paid my second visit to One Flew South, an upscale restaurant in Concourse E of Atlanta’s Hartsfield Airport, recently listed in Frommer’s top-ten lineup for US airport restaurants.
During a previous layover here, I’d discovered the delights of food prepared by Chef Dwayne Nutter, and knew straightaway that my food court days in Concourse E were numbered. Chef Nutter, a full-time innovative chef and part-time comedian, took a timeout against the restaurant’s wallpaper backdrop of a South Georgia forest.

This trip I wanted to try the sushi menu. Waiter Mike, a musician and self-confessed student sommelier, had recommended a great duck sandwich last time, and now offered suggestions for sushi. I ordered two kinds of raw Nigiri—the market catch of red snapper (shown above), and yellowtail tuna; and two kinds of cooked Nigiri—smoked salmon and octopus. Every bite was fresh, fresh, fresh—and delicious.

First though, I tried Chef Nutter’s clam and miso chowder. Tiny clams, morsels of salt cod and salmon, thinly-sliced new potatoes, carrots and slightly crunchy celery were mounded in a lightly tinted broth. A seriously thin rice cracker hovered butterfly-like atop the composition. Although a fitting accompaniment to the sushi, the chowder was served luke-warm and did not measure up to the duck confit sandwich I’d sampled on my first visit to the restaurant (That memorable treat of a sandwich came with a fig and toasted pine-nut relish, scallions and a side of slaw).

My bottom line: The sushi is outrageously priced. Both menus are tasty, but Chef Nutter’s is the more interesting and a better value. I’ll stick to that one next time.

At One Flew South, Dwayne Nutter has proved his mettle, meeting the special challenges of preparing gourmet meals based on fresh ingredients in an airport setting , and well behind airport security gates (think knives chained to the counter, and getting bags of clams and fish past TSA). The results are impressive.

In 2009, Chef Nutter and partner Chef Todd Richards took over Rolling Bones BBQ in Atlanta, and have since developed it into an old fashioned, southern style—and very successful—barbeque pit. If One Flew South is any indication of what these folks can do, it would be well worth a try. 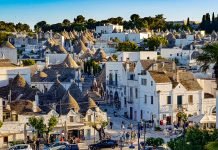 In Alberobello, Cucina Povera gets an upgrade